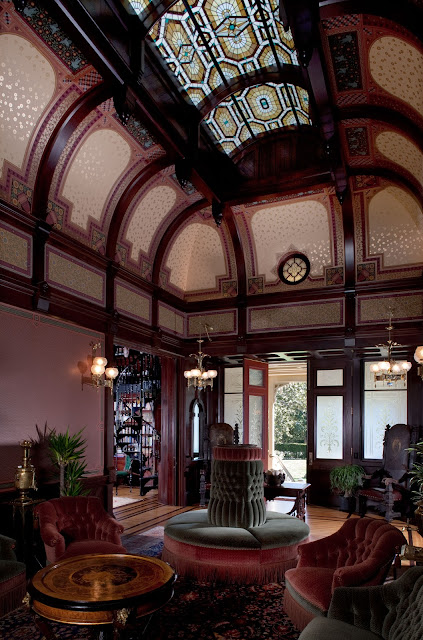 With its central leaded art glass laylight arching above multi-ribbed, coved panels, the new ceiling treatment has restored the Main Hall’s original proportions. The upper part of the room, previously opened up to the roof (see previous image), now houses a daylight-enhancing plenum enclosure, with a perimeter catwalk and HVAC equipment. The open second floor hallways that had overlooked the Main Hall now borrow daylight from the central plenum space through new art glass windows. Accessed via the Library’s cast iron spiral staircase, an entirely new mezzanine-level room (the Map Room) was carved out of the vertical space above the front doors to the roof, and overlooks the Main Hall through a pivoting bull’s-eye window. As the dominant hub of the formal rooms, the new Main Hall design sets the tone for the surrounding public spaces, with its bold structure of Eastlake-style mahogany woodwork, and a strikingly panelized assemblage of gold-tinged Aesthetic Movement wallpaper patterns. 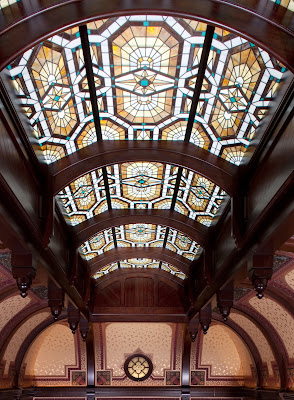 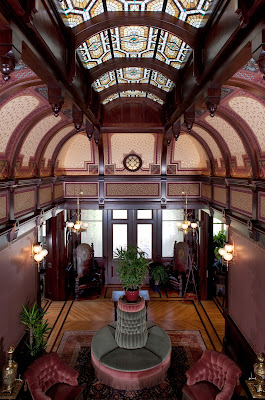 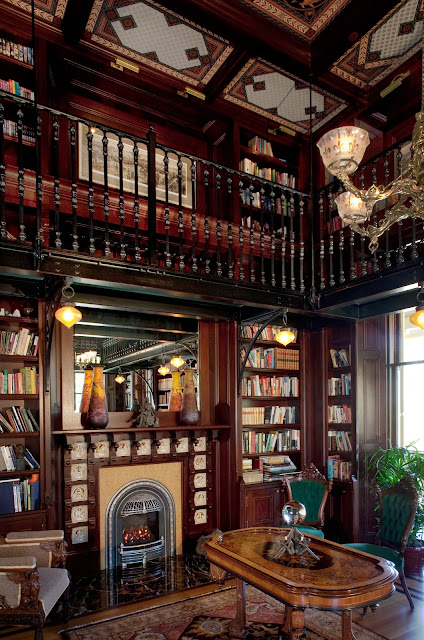 The Library’s sixteen foot ceilings, a typical feature of Mableton’s formal rooms, allowed sufficient headroom to suspend a glass-floored, period-style cast iron and steel catwalk to access the upper bookcases, as well as the adjacent Map Room. To admit more daylight, the floor-to-ceiling bookcases are splayed around the windows, and pairs of arching iron brackets beneath the catwalk double as supports for art glass lighting.  Detailed in the Eastlake taste, the mahogany mantel features fifteen vintage Minton tiles, each depicting a Shakespearean play, and set within its own chamfered frame. Also appropriate for a Library design of this era are the classical references in the Neo-Grec style wallpapers, which enliven the panels of the beamed and coffered ceiling. 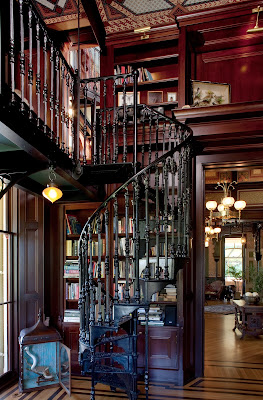 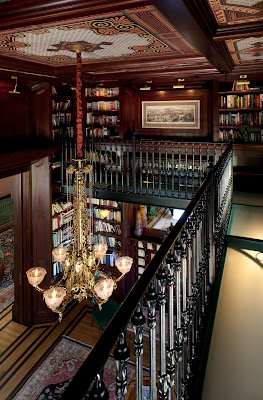 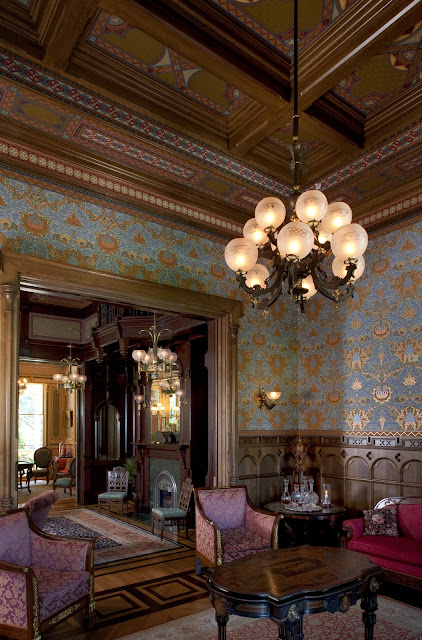 The masculine connotations of the Gothic Revival style make it an apt theme for the Gentlemens’ Parlor, which features an unusual oak wainscot design adapted from a period example by noted English architect William Burges.  The large-scale wallpaper adapts an 1880s pattern by William Morris that was first commissioned for St. James’ Palace in London. The ceiling treatment is defined by a coffered arrangement of chamfered beams, grained to match the room’s oak woodwork, and enriched by a series of geometric, Gothic-inspired wallpaper panels and borders. Seen through the wide pocket doors, the fireplace end of the Main Hall is overhung by two (of four) matching bracket chandeliers that were custom made for this project. Glimpsed beyond the Main Hall is the Ladies’ Parlor, which completes this trio of interconnected living spaces. 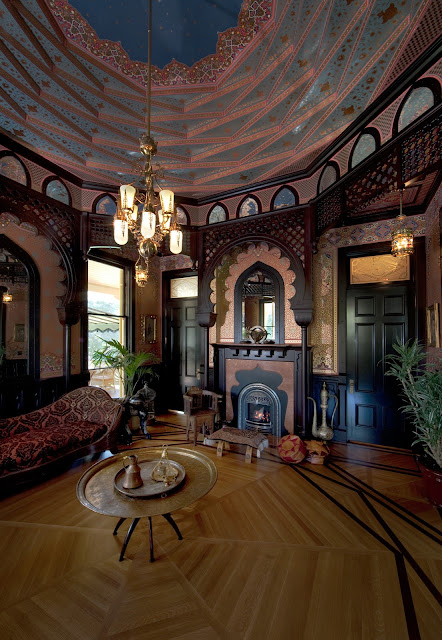 Reviving a period tradition of exotically decorated retreats that were often called “smoking rooms”, the Turkish Parlor for Mableton, conceived in the Moorish Revival-style, here takes the form of a domed octagonal pavilion, set within a rectangular space. Comprised of stacked, rotated, and corbelled octagons of graduating sizes, the dome rests on a delicate, ebonized oak framework of pierced screens, lobed horseshoe arches, and slender columns that are alternately free-standing and engaged to the walls. The small beveled mirrors that ring the base of the dome help expand the space; below, larger opposing mirrors are framed within the horseshoe arches. At the center of the dome, the flat, deep blue “night sky”oculus crowns a Persian-inspired wallpaper ensemble, and is the only visible surface that exposes the full height of the room’s sixteen-foot ceiling. Recalling the similarly configured, original fir flooring pattern of the Main Hall, the radial spider-web design of the new hardwood floor mirrors the geometry and proportions of the dome. 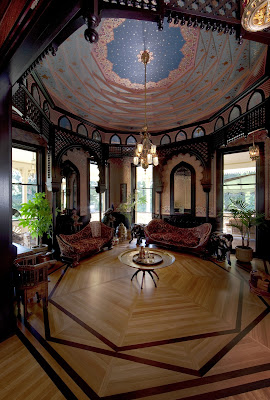 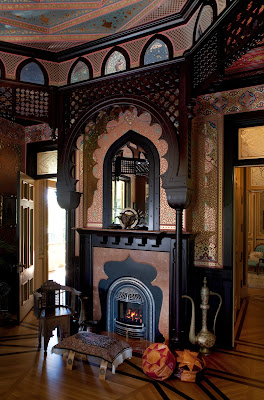 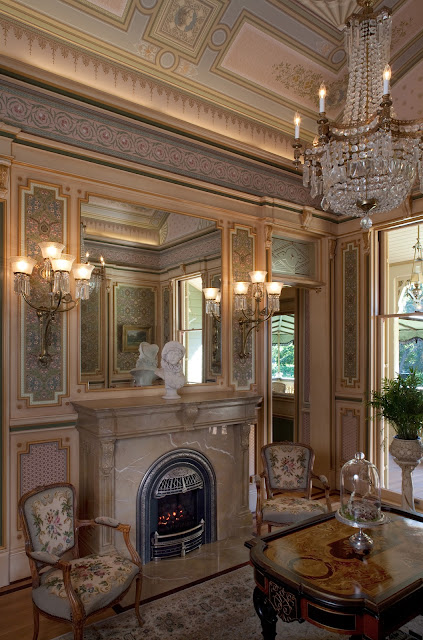 French Revival styles, a frequent period choice for grander homes, tended to have feminine connotations, and were often applied to “gender-specific” rooms, such as Mableton’s Ladies’ Parlor. A bright southerly exposure and views of the garden suggested greater daytime use for this room, and also prompted the choice of its lighter, softer color scheme.  The previously flat sixteen-foot ceiling has been reconfigured into a room-wide barrel vault, and embellished with a Neo-classical style wallpaper treatment. Glazed and gilded painted finishes on the Louis XVI-style woodwork complement the panelized wallpaper insets, with mirrors used to amplify the light and views. This room retains its original “slip-head” windows (typical of all the parlors), which retract into the upper walls like pocket doors, transforming the windows into seven-foot-high doorway openings to the verandah. 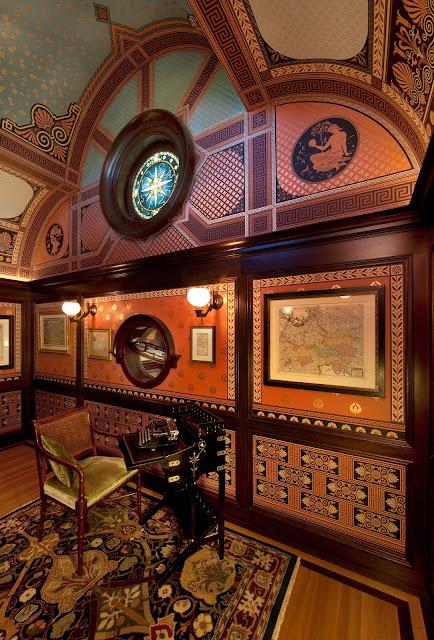 Overlooking both the Main Hall and the axial entrance walkway, Mableton’s Map Room is a newly-created mezzanine-level room accessed via the Library’s spiral stair and catwalk.  As the name implies, the room houses the owners’ collection of antique maps, and the cartographic theme is reinforced by a stained glass compass rose window designed and fabricated for the Map Room by Theodore Ellison Designs. Directly opposite the compass rose window, a glass-floored steel observation platform (not seen in this view) provides access to the three-part window behind the curving bargeboard of Mableton’s main gable, and a pivoting bulls-eye window below opens to the Main Hall.  The neo-grec wallpaper scheme of the Library expands into the three-part ceiling and panelized walls of the Map Room which doubles as a private study. 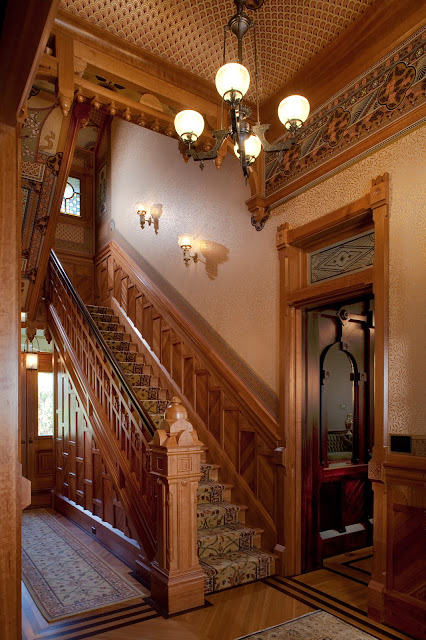 The new design of the Main Stair Hall interprets the Anglo-Japanese mode of Aesthetic Movement taste, with repeating fan motifs and linear outlines adapted from Mableton’s intact, original staircase railing. To visually foreshorten the apparent length of the tall, narrow space, the ceiling was divided into a sequence of square coved sections (part of one is seen here), divided by ornamental wooden trusses, and fitted with compatible wallpaper elements and accents. This view is taken from a ten-foot-wide pocket doorway to the Dining Room; at right is one of two narrow pocket doors that flank the fireplace in the Main Hall, and the doors behind the staircase lead to the verandah. Partly visible at the stair landing is one of a matching suite of Japanesque leaded art glass windows (including a laylight above the stairs) that was created for this project. 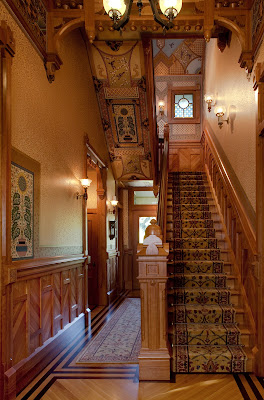 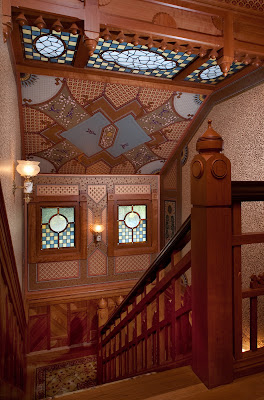 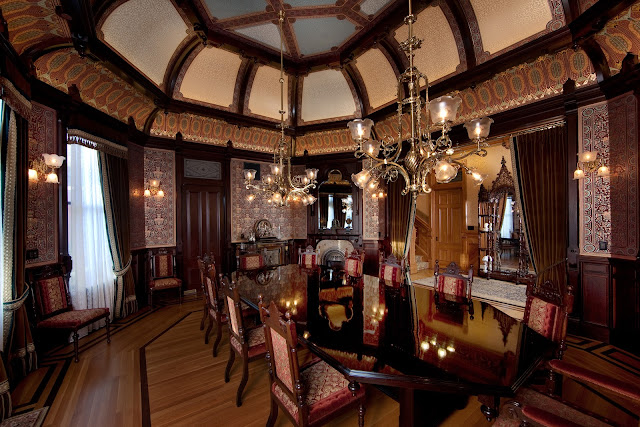 Mableton’s Dining Room, second in scale and importance only to the Main Hall, is an elongated octagon in plan with a double-coved, ribbed ceiling, and shares the Main Hall’s “Stick/Eastlake” design aesthetic.  Situated on the Mansion’s central axis, the Dining room features a three-sided outside wall overlooking the pool and landscape elements that form the western terminus of that axis.  Directly opposite the three-sided outdoor wall is its interior counterpart that incorporates a built-in fireplace, massive pocket doors and a built-in sideboard (not seen in this view). Dark mahogany millwork frames wall, frieze and ceiling areas filled with gold and metallic accented wallpapers inspired by the Victorian avant-garde designs of Christopher Dresser.   A dining set comfortably seats  fourteen and is composed of antique and reproduction chairs as well as a table custom built to the geometry of the room. 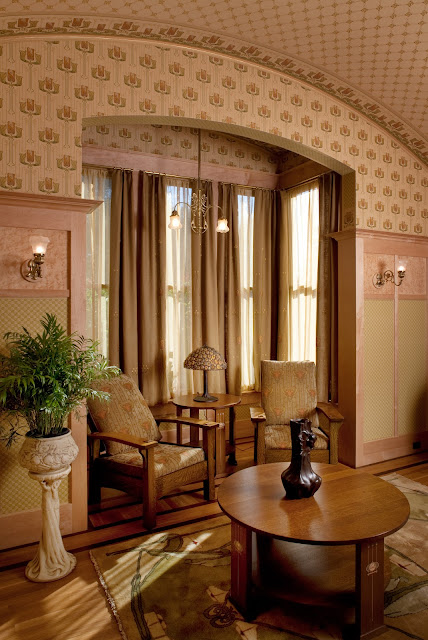 Mableton’s Master Sitting Room is part of a suite of rooms that also includes the Master Bedroom and Master Bath that occupies one of two new wings built at the rear of Mableton’s main floor.  Subordinate in scale and subdued in palette, this suite of rooms departs from the Victorian styles that characterize the rest of Mableton’s interiors by introducing Arts and Crafts themes with elements of Art Nouveau. These rooms are, by design, a quiet retreat enjoying a favored location overlooking English landscape, parterre and pool garden areas.  The Master Sitting Room’s interior includes a gently vaulted ceiling whose form is echoed in the arched opening that frames the south-facing bay window.  A tall maple wainscot with bird’s eye and densely patterned wallpaper insets provides sets off the bold scale of the wallpaper patterns on the upper walls and ceiling in this sunny interior. 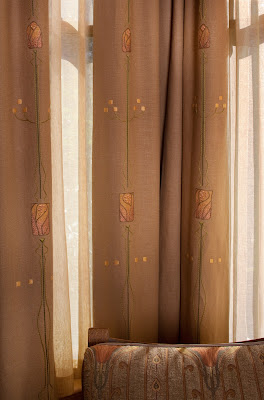 ROBA, Inc.
Oakland, CA, United States
Rynerson OBrien Architecture identifies and develops the potential for order, function and beauty through design. We deliver our clients through the design and construction process, resulting in a coherent physical product. We are a 6-person firm in Oakland, California, providing complete residential and commercial architectural services tailored to meet the specific demands of our clients. Rynerson OBrien's design teams are built around the active participation of at least one principal in all phases of the project. The personal involvement and accessibility of our partners provides for effective client communication, design continuity and hands-on contract administration.

For the full Rynerson OBrien Architecture Residential and Commercial Portfolio's as well as contact information and much more, visit our website.